A postcard from the past

In the midst of preparing for the anniversary year, Paul Sebastian Schwenk stumbled upon a postcard written by his great-grandfather, in which he described starting the company to his parents. One hundred years later, this postcard was a nice surprise for those reading it. 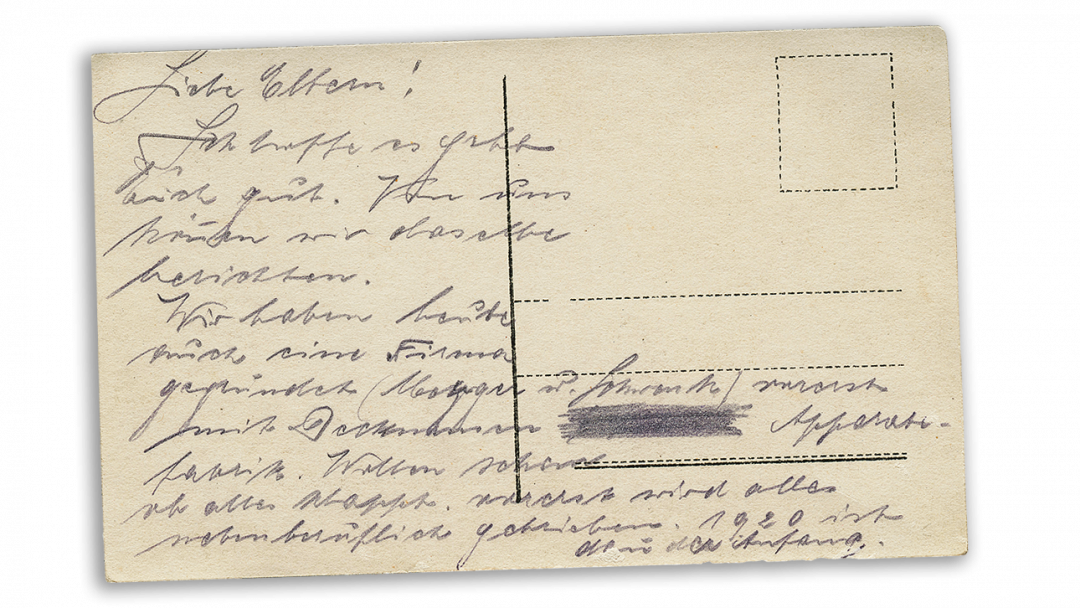 My dear parents,
I hope that you are well. All is well here. Today, we founded a company (Mezger & Schwenk). It goes by the code name “Apparatefabrik” [“gadget factory”]. We’ll have to see if everything works out. For the time being, we’ll be running it in our spare time. 1920 will just be the beginning.

We invited you to send us a postcard – and the response was overwhelming. We received post from every corner of the world: from India and Malaysia, from Belgium, England, France, the Netherlands, Portugal, Russia and Spain. Every conceivable genre was represented. Some images had been photographed while others had been artistically and masterfully painted by the sender using watercolours, but all had been crafted with love. And each card told its own wonderful story. Naturally, there were also plenty of cards from nearby towns such as Albstadt and Balingen, as well as from Haigerloch itself of course.

We even had one from a road called Schmalzgasse. Yes, there really is a street whose name translates as “Lard Lane” or “Slushy Alley”. If we have failed to mention your location or country here, we would like to apologise but there were simply too many to include. We hope you understand. Wherever you wrote to us from, we would like to reassure you that we were delighted to receive each and every postcard. Thank you so much for all your kind greetings.