What is KNX? A technology and its endless possibilities

Whether it is universities, schools or other administrative and office buildings, care facilities and hospitals, museums, hotels or even private homes - KNX makes more of it. The advantage of a KNX system is its versatility. All building functions can be networked, programmed and controlled via KNX systems. Starting with heating, ventilation and room climate control, through lighting and shading to alarm, security and information systems. All these functions can be controlled automatically via intelligent sensors, manually at operating devices in the rooms or centrally via a visualisation - in the house or mobile via smartphones or tablets.

Theben, KNX and the KNX Association - the fieldbus and its history

KNX stands for "Konnex" or "connectivity" (connection) and is a field bus for building automation. KNX emerged from the merger of the European organisations EIBA, EHSA and BCI, which aimed at a common standard for the fieldbuses existing at that time. Today, KNX is the global standard for home and building automation (ISO/IEC 14543). There are over 90,000 trained KNX partners in 190 countries worldwide. The guidelines of KNX technology are regulated and defined by the KNX Association, to which more than 495 companies worldwide belong today. KNX thus stands for extremely high investment security and is future proofed. Theben was one of the first companies to join the association and, as a member of the Executive Committee, actively influences the further development of KNX technology. Furthermore, we have also been a member of the KNX Technology Committee since 2015. In 2019, Theben was the first manufacturer to introduce KNX radio actuators according to the Data Secure standard. Theben - a competent partner in all matters relating to KNX systems.

KNX sensors and actuators: How everything interacts

KNX is like the body's nervous system, which is equipped with sensors and actuators. Everything the sensors detect is sent to the actuators, as a command. The actuators trigger the desired response: they switch on the light when it gets too dark, they activate the heating when it gets too cold and they control the blinds, when the sun gets too bright. The topology is extremely versatile: line, tree, or star structures are possible.

KNX devices are connected to the KNX bus which in many cases is also the power supply to the device, for example presence detectors. While in conventional systems control and energy distribution are interconnected, KNX participants communicate using their own line network. The line network of a KNX installation is divided into sections, so-called lines, and structured hierarchically. The lines are logically and physically interconnected via line or area couplers. Each line can contain up to 256 participants. The maximum number of participants depends on the power supply used and the bus current consumption of the individual participants.

15 of these KNX lines make up one area. 15 areas can be linked with each other via an area line, the so-called "backbone". Minus the system components, up to 58,384 KNX devices can be installed in one system. 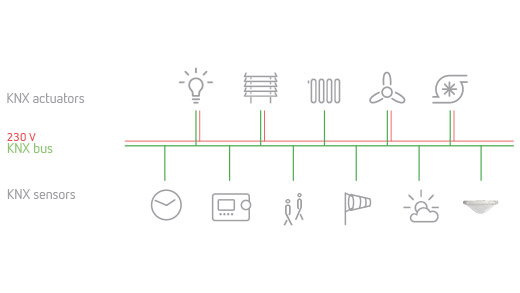 ETS - the software for every KNX system

Communication between the KNX bus devices takes place via data telegrams. The assignment between the individual participants as well as the configuration of the functions is carried out with the so-called ETS, the "Engineering Tool Software".

The ETS was created by the KNX Association and is constantly being further developed. It is the common basis of all KNX installations. All KNX devices must be certified by independent institutes. After successful certification, the device-specific data can be imported into the ETS. In this way, KNX installations can be carried out independent of the manufacturer.

The ETS programming of a KNX system is as versatile as life itself. Because when, where, in which rooms, what should happen, is definitely a complex task that requires foresight and flexibility. The advantage of KNX is that the functions of a system can be reprogrammed at any time with the ETS - without jamming and clamping.

Secure! Thanks to KNX Data Secure

As the degree of networking in the Smart Building increases, so do the requirements for the security of the individual systems. The KNX Association is responding to this with the "KNX Data Secure" standard. As early as 2019, Theben was the first manufacturer to introduce KNX radio actuators according to the Data Secure standard. Today, countless KNX products from Theben support KNX Data Secure and thus offer maximum protection against data theft and manipulation.

The KNX advantages at a glance: